The next carnival will be up on June 15th. Please send your nominations by e-mail to varnam.blog @gmail. Thanks Fëanor for his nominations.

That’s it for April. The next carnival will be up on May 15th. If you have any links for the next carnival, please e-mail me (varnam dot blog at gmail)

In A Survey of Kerala History, Sreedhara Menon summarizes the impact of Tipu Sultan’s brutal raids on Kerala and concludes that it introduced modern and progressive ideas to Kerala. These progressive ideas include collecting taxes directly from the peasants and building roads which connected various remote parts of Kerala. Menon also credits Tipu Sultan for creating a social revolution in Kerala by attacking Brahmins, Kshatriyas and Nairs. By declaring Nairs as the lowest caste and by forcefully converting them into Islam gave the lower castes a sense of prestige and position. As to the drawbacks to Tipu’s wars in Kerala, Menon writes that the wars halted black pepper cultivation and thus destroyed the economy. The ports became empty and unused and the foreign currency that came from trade relations which spanned a millennia came to a halt pushing people into poverty.
Fortunately Menon does not call him a freedom fighter, but many many historians and politicians and literary types like Girish Karnad and Bhagwan Gidwani consider him so. They also consider him to be a great warrior, a humanist, the son of Kannada and a tolerant ruler. Sandeep, by going through copious amounts of primary sources on Tipu finds that a fictional narrative has been constructed regarding every aspect of Tipu’s life and the tale which was spread by bards who relied on bakshish, now is spread by modern bards for various nefarious reasons.
The part that Sreedhara Menon whitewashed s expanded by Sandeep and that is not for the faint of heart. Tipu hunted down the Nairs who rebelled against him and forced them to surrender. Here is the what happened next:
. 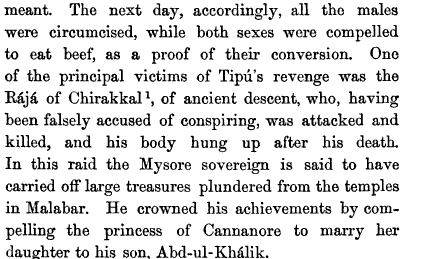 Another account of Tipu’s march through Calicut records that both men, women and children were hanged; churches and temples were desecrated; women were forced to marry Muslim men. Proud of his accomplishments in Calicut, he wrote a letter gloating about this massive conversion. He also congratulated his commanding officer for circumcising the captives and converting the others. As he marched to Travancore, burning towns and villages, he was halted by the Nairs and extreme cruelty by Tipu caused an exodus of people from Malabar. This is the level of progressiveness that is attributed to Tipu by a writer who had a good idea of what really happened as he was the former editor of the Gazetteer of Kerala. The trend seems to be to not let facts get in the way of a progressive interpretation.
Another myth that prevails is that Tipu was a freedom fighter because he fought against the British. Less mentioned is the fact that he working on replacing one colonial power for the other for his own personal gain. In various letters written to the French,he conveyed the notion that he was friends with the local Muslim rulers and with the combined French army, they could rout the British. To entice the French, he promised half the territory that would be taken away from the British and he had correspondence with Napoleon himself. Napoleon was not the only foreigner with whom he bargained. He wrote letters to the Caliph, to Zaman Shah of Afghanistan, and to other foreign Muslim rulers, inviting them to wage the battle against the infidels.
Besides revealing such less mentioned facts, the book begins with the crux of the problem which is the problem with historiography in India. These narratives are not written with a focus on revealing the truth, but for subverting certain truths. There is a revealing conversation between S L Bhyrappa and G. Parthasarathy, a Nehru-Gandhi family acolyte, who lead a committee to foster national integration through education. Parthasarathy tells Bhyrappa, who at that time was a philosophy lecturer, that teaching about the iconoclasm of Aurangzeb and Mahmud of Ghazni would poison the minds of the students, offend the minorities and “cleave the society”. Hence it was important to use “maturity and discrimination” in selecting the narrative.
In 2009, I wrote a piece for Pragati about these biases and one of the solutions was for us not to leave the history to historians.

Lawsuits, protests, activism—these can be an effective tools, but there is also a need to popularise the discourse. Stephen Ambrose, David McCullough are masters of the popular history genre in the West. Barring a few honourable exceptions, in the Indian context this genre consists of writing more biographies of Nehru and Gandhi. There is a need to add more voices to this discourse—to explain how the invasion theory evolved to migration theory to Aryan trickle down theory—because this Aryan-Dravidian race theory still has serious social and political implications in India.[Op-Ed in Pragati: Getting Objective about it]